Thank you for stopping by. You can watch my review or read it below the video. 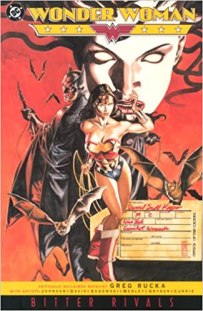 Bitter Rivals begins with Wonder Girl, Cassie, telling Martin and Robert a bedtime story. The story tells a kid-friendly version of how Medusa came to be and her bitter end. This story sets up the background for Medusa one of the storylines in Bitter Rivals.

Bitter Rivals has 4 storylines being weaved together.

1.Wonder Woman Searching for a doctor to help save Silver Swan.

2. Wonder Woman asks Batman to solve who killed the leader of the protestors. Batman searches for clues and meets Wonder Woman to give her what he as uncovered.

3. Dr. Cale’s attempt to make Wonder Woman look bad in the press and the readers get her backstory.

4. The Gorgon sisters try to get a reluctant Circe to bring Medusa back to life.

The art was great. It did an excellent job of painting the story. You see real pain in Wonder Woman as she watches the Mother of Silver Swan weep at her daughter’s bedside. I love the Batman and Wonder Woman cover. It is so awesome.  I would love to have a print to hang this up above my desk. The writer, Greg Ruka,  did an excellent job of weaving four storylines together to get a cliff hanger that has you ready for the continuation of the story.

I really enjoyed this story. I am picking up the next story, Eyes of the Gorgon, to see what happen next after that cliff hanger. I rated Bitter Rivals 4 stars. It was a great read and it left me with wanting to know more.